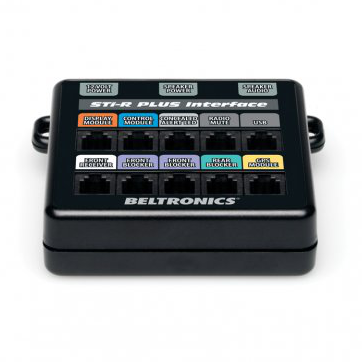 STiR Plus has been discontinued

The Beltronics STiR Plus is no longer being produced. See below for new remote and stealth installed radar detector:

STi-R Plus (North American Version) gives advanced warning to red-light cameras and speed cameras in Canada and the USA. It comes pre-loaded with the award-winning Defender Database for North America.

Tired of false X-band and K-band alerts in the city? You can now easily lock out these false alerts by tapping the mute button twice. AutoLock (equivalent to Escort’s AutoLearn) can intelligently lock out false alerts automatically.

STi-R Plus features TSR (traffic signal rejection) which is exclusive on the North American version. TSR supresses K-band signals from traffic drones designed to sample traffic flow on US highways.

Improve sensitivity by disabling specific narrow-band Ka frequencies range that are not used by the police. Better response time against Instant-On or Quick-Trigger radar. This great feature is exclusive in STi-R Remote and the new STi-R Plus only.

Be the first to review “Beltronics STiR Plus” Cancel reply